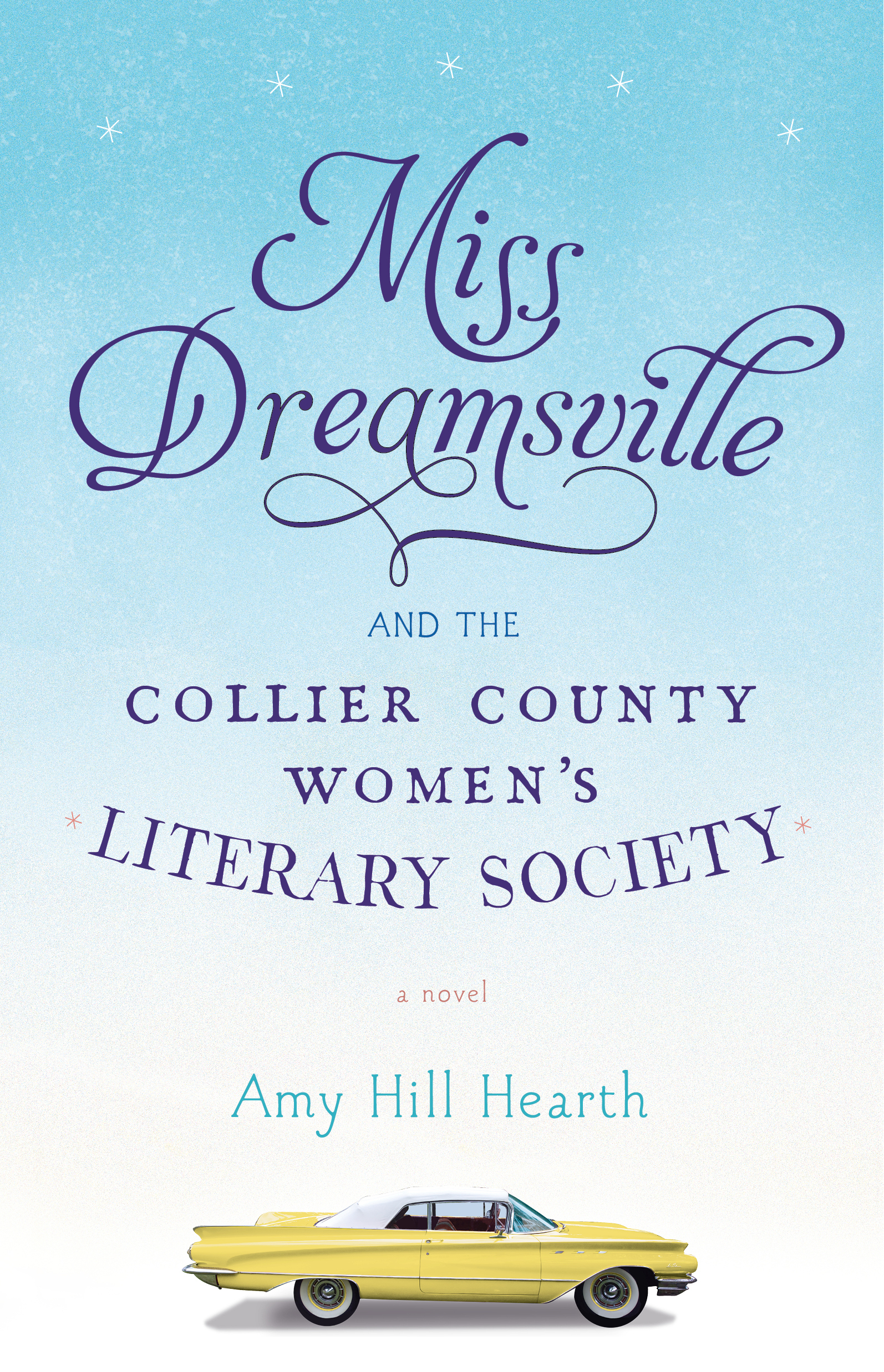 Miss Dreamsville and the Collier County Women's Literary Society is the first of two historical novels about a Northern woman who moves with her family to a sleepy Southern backwater in Florida in the early 1960s.

The novel was the October 2012 book club pick for Simon & Schuster; a Reader's Digest Select Edition; and the January 2013 selection of the Pulpwood Queens, an international online book club with more than 700 chapters. The book was translated into Portuguese and published in Brazil. It has also been published in Finland, Hungary and the Czech Republic.

A sampling of reviews:

"The writing is brilliant, especially the dialogue through which the characters are defined." - Philip K. Jason, Southern Literary Review

"Miss Dreamsville and the Collier County Women's Literary Society was a surprise. Segregation, feminism, gays coming out, inter-racial dating, it's all in there, written as it happened in small towns everywhere." - Patricia Harman, author of the bestselling novel, The Midwife of Hope River

"You may already know Hearth's name - the former journalist wrote the nonfiction book Having Our Say: The Delany Sisters' First 100 Years which was a bestseller and play. Miss Dreamsville is Hearth's first novel, and her fictional storytelling is just as captivating." - Dawn Baumgartner Vaughan, The Durham (N.C.) Sun

When Boston-bred Jackie Hart sweeps into sleepy Collier County like a late-afternoon storm on the Gulf, divorcee Dora has a feeling her life is about to change. Jackie immediately forms the Collier County Women's Literary Society, and, for the first time in her life, Dora feels she has found her place in the world. The 1960s is a time of shifting perspectives and dramatic change, and as these changes creep slowly into Collier County, Dora and her small group

of misfit friends band together—helping each other hold onto their dreams and struggle through the complexities and hardships of everyday life united.

QUESTIONS AND TOPICS FOR DISCUSSION

1. Discuss the various forms of prejudice that each character is subjected to throughout the novel. Consider not only the racism that exists in Collier

County but also the less overt discrimination—like the doctors' attitude toward Robbie-Lee's mother's chest pain, or the way Dora is treated for being divorced. Do you think such attitudes are inherent or learned?

2. How much of a person's character is shaped by the times in which they live? Was it difficult for you to imagine a time when segregation was so prevalent

that even someone as good-natured as Dora would try "not to stare at the colored girl? (page 12)

3. What was your reaction when Jane reveals to Jackie that she completely fabricates her sex advice articles? Did you find it ironic that she "sounded annoyed" when Jackie asked her if she had actually done what was written in the article? (page 53) How easy do you think it is to ignore the possible consequences of our actions when we are separated from actually having to

see the results—by distance, or otherwise?

4. Dora says about Jackie, "She was, clearly, a 'Boston Girl' through and through. Cultured. Progressive. All that Yankee stuff we Southerners find so irritating." (page 10) Later, Jackie says, "What a mean little redneck town this is. I had no idea it would be so . . .Southern." (page 205) How did you react to this hidden conflict between North and South? Do you think this sentiment still exists today? What do the rest of the literary society learn from Jackie and her Northern family (and vice versa) that changes these attitudes over the course of the novel?

5. Some authors (e.g., Mark Twain) intentionally use colorful storytellers who are to be believed more because of the underlying truth embedded in the story

6. What makes Jackie the ideal friend to each member of the Literary Society? What common ground do they share? Do you have someone who has been a similar presence in your life?

7. Were there any historical facts about life in Florida during the 1960s that surprised you? In what ways does fiction provide a means for a fuller understanding of a nonfiction truth?

8. Why do you think Jackie was the only one who had such a strong response to The Feminine Mystique? Do you agree with Priscilla that the issues explored in the book weren't about women universally? What about Robbie's feeling that men were equally limited in their choices? Do you think their points still hold true?

9. Discuss the members' reactions to Their Eyes Were Watching God. What did you think of their conversation? Was anyone's opinion unexpected? Do you think their conversation was worlds apart from the discussion that would take place today when reading the same book?

10. Many characters in the book have an alter ego of sorts: Dora is the Turtle Lady, Jackie is Miss Dreamsville, Jane is Jocelyn Winston, and even Miss Lansbury is an Osceola Indian who has been "passing for white." (page 248) What do these alter egos imply about each character's personality?

11. The town is shocked and angry when they discover Jackie is Miss Dreamsville. Do you think their reaction is warranted? What does it say about the disconnect between fantasy and reality? Do you think there is a real person who could've satisfied people's various visions of Miss Dreamsville? Or would they have been disappointed no matter what?

12. Jackie says, "Maybe freedom means defining yourself any way you want to be." (page 145) Do you agree? How do you feel about Jane's reaction that "we are a long way from that happening"? Do you think the society members end up defining themselves how they want to be, and thus find their freedom? Whose life do you think was changed the most by being a member of the society?

13. Dora reflects, "How hard it must be to keep fighting for your dream when that dream is probably a mirage." (page 199) What do you think is the difference between a dream and a mirage? Discuss the role dreams play throughout the novel. Were you surprised to discover Priscilla is pregnant when she seems to have the most focused dream of going to college and becoming an English teacher?

14. After everything that's happened to them, Dora thinks, ". . . now I could see the genius in allowing the future to evolve. You could create momentum. You could launch something and see where it goes. You couldn't line everything up, like so many dominoes, and make everything fall into place." (page 250) Do you agree or disagree with her? What was your reaction to the ending? Did the protagonists follow the paths you thought they would?

15. What differences (or similarities!) did you notice between the literary society in the novel and your own book club?

1. Learn more about the author by reading her essay "Why I Write." [Located in the main menu of this website]

2. Each character in Miss Dreamsville is searching for a purpose to keep them going or a dream to follow. Bring something to your book club that represents a personal passion and turn the meeting into show-and-tell.