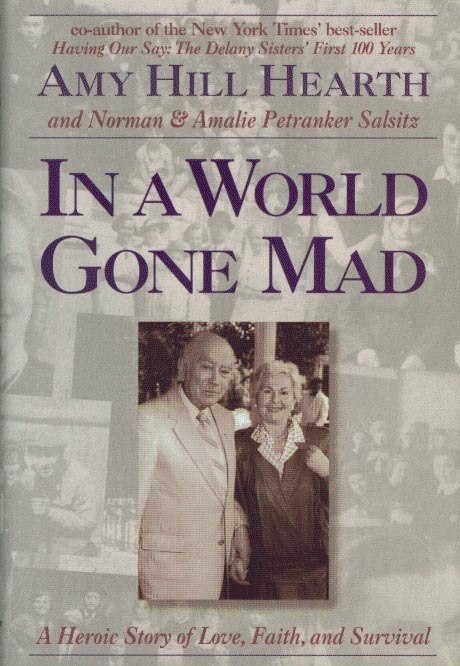 In a World Gone Mad: A Heroic Story of Love, Faith, and Survival

An oral history of a married pair of Holocaust survivors who survived by masquerading as Christians and working for the Underground.

This 2001 book tells the individual stories of Amalie Petranker and Naftali (Norman) Salsitz, both now deceased, who survived the Holocaust by posing as Christians. While the book focuses on the war years, including the extraordinary way in which the couple met near the end of the war, it is also a study of the couple's courageous efforts to re-build their lives in America, where they raised a daughter and struggled to fit in. The war years are never far away in their hearts and minds, however. One of the central questions of the book is, How does one live a "normal" life after enduring so much terror and loss?

A sub-plot of this nonfiction book is the evolution of the friendship that grew between writer and subjects during the course of creating the book. Despite being aware that a significant part of my ancestry is German Christian, they began to treat me like a daughter. To me, the fact that Norman and Amalie accepted me and grew attached to me is proof that they never lost their essential humanity, despite what was done to them and their families.

"One of the most original and astonishing books yet about World War II and its aftermath." – Norman R. Brokaw, Chairman of the Board, William Morris Agency

"Caught up in the evil of the Holocaust, Norman and Amalie Petranker Salsitz survive, move forward, but do not forget. Their story...touches us because it is a personal story." - Abraham H. Foxman, National Director, Anti-Defamation League.

Introduction to PART I: "The Journey Begins"

This section recounts how the author was introduced to Norman and Amalie Salsitz.

1.What information is revealed about the author, Amalie, and Norman?

2. What is meant by "a journey of understanding?"

This chapter details the life of Amalie as a child in Poland.

1. In what ways did Amalie have a beautiful childhood?

2. What do you learn about the personalities of Norman and Amalie from the way they interact as they are interviewed by the author?

Chapter 2: "Of Mind and Memory"

This chapter provides a glimpse of Norman, past and present.

1. In what ways is Norman still fighting a war?

2. What is revealed about Norman's past in this chapter?

This chapter tells what happened to Amalie's sister, Celia.

1. Why is the telling of this account difficult for both the interviewer and interviewee? How did you feel when reading it?

2. What motivated Celia to do what she did? What were her options? What would you have done in her place?

This chapter shows Norman talking to schoolchildren about the Holocaust.

1. What kind of childhood did Norman have? What impressed you about the stories of his childhood?

2. What motivates Norman to give speeches? How does he benefit from sharing his story? What impact do you think his stories have on his audiences?

This chapter recalls the murder of Amalie's mother and includes a trip by the author to the Holocaust Museum.

1. What incident stands out for you in this chapter? Describe your feelings after reading about what happened.

2. What did Amy Hill Hearth experience at the Holocaust Museum? How do you think she was changed by her visit there?

This chapter recounts acts of anti-Semitism and describes relations between Christians and Jews in Poland.

1. From Norman's perspective, what facts about Jews and the Jewish faith are important for people to understand? Did you learn anything new about these topics from reading the chapter?

2. Compare anti-Semitism during Norman's you with anti-Semitism today. In your opinion, what are some of the reasons it has continued?

Chapter 7: "Embracing the Past"

This chapter details how the Germans began their assault against Jews and how Amalie and her family were affected.

1. Discuss the losses that Amalie had to cope with and how she dealt with them.

2. What was it like to be Jewish in Poland during this time? In what ways was that experience similar to and different from being a member of a minority group in America today?

This chapter offers insights from Leo Petranker, a first cousin of Amalie.

1. What experiences did Leo Petranker and Amalie have in common?

2. What, in Leo's opinion, caused the Holocaust, and why does he believe it couldn't happen here? Do you agree?

This chapter describes incidents surrounding the murder of Norrman's father.

1. Discuss the changes in daily life that Jews were forced to make. Which of those changes do you think were the most difficult?

2. What is your reaction to the way Norman handled his father's death? How would you have responded? How might you have been changed by the experience?

This chapter introduces Mundek, whom Amalie describe as her guardian angel.

1. What did Mundek do to warrant having Amalie call him her guardian angel? What do you think motivated him to help her and others despite all the risks? Is it risky to act as a guardian angel today?

2. Describe how Amalie chose her new name and adjusted to her new identity. What aspects of the decision were difficult for her? What would be most difficult for you under similar circumstances?

Chapter 11: "A Last Letter from Mother"

1. What details often meant the difference between life and death to Jewish people during this time period? What was the cost of being a survivor?

2. Review the people in this chapter who were murdered and the reasons why they died. How does it make you feel to read about them?

This chapter tells of Amalie's double life when she masqueraded as a Christian.

1. What factors worked in Amalie's favor as she struggled to survive? Do you agree with her comment that luck was important? What part did her looks and beauty play?

2. What were some elements of Amalie's masquerade? What were the most difficult moments for her? How do you think you would respond if you were forced to pretend practicing a different religion?

This chapter focuses on some harrowing encounters experienced by Norman and his brother.

1. What feelings did Norman express about his uncertain future, living hour by hour? How do you feel in uncertain times?

2. What shocked you about this chapter and why? What makes these events so shocking?

Introduction to Part II: "A Warning to the World"

This section deals with causes of the Holocaust.

1. Why is it important to tell the story of the Holocaust, and how is it currently being told?

2. What lessons and warnings does the Holocaust offer?

Chapter 14: "The Next Generation"

1. How did the Holocaust influence Esther's life and the lives of others of her generation?

2. What parallels are there between the Jews of the Holocaust and people with AIDS in modern society?

Chapter 15: "A Time for Reflection"

This chapter looks at Norman and Amalie's struggles after the war.

1. How is Esther's life different from Amalie's?

2. What difficulties did Norman and Amalie face after the war? How do you think you would have responded under similar circumstances?

Chapter 16: "A Rocky Start in America"

This chapter describes some of Norman and Amalie's first experiences in America.

1. What impressed you about Norman's good and bad memories of his early years in the U.S.?

2. Do you think it is harder or easier to be an immigrant today than it was then? Explain.

1. What new insights about Amalie and Norman did you gain from this chapter?

2. How was Marilyn's life different from Amalie's and why?

This chapter describes Norman's decision about fighting in Palestine.

1. How did you feel when reading about the painful choice that Norman made?

2. How was life in America different for Norman than it was for Amalie?

Chapter 19: "Hope for a Brighter Future"

This chapter looks back as Norman and Amalie's lives as they settled in America.

1. Amalie notes that being a survivor is a very complex experience. Discuss some of the many adjustments she had to make.

2. How did being a teacher help Amalie? Why was she especially suited for it?

Chapter 20: "The View from Israel"

1. In what ways are Amalie and Pepka similar? How are they different?

2. How do Israelis view the Holocaust?

This chapter recalls Norman and Amalie's struggles to have a child.

1. What were the pros and cons of Amalic and Norman having a child?

2. Why was Esther a miracle baby? In what ways did her birth cause sadness?

This chapter provides more details about Norman and Amalie's new lives in America.

1. What roles did luck and hard work play in Norman and Amalic's new life in America?

2. How was Esther's childhood different from the experiences of other children her age?

Chapter 23: A Nephew Shoulders the Past

1. In what ways did Leibush depend on Norman for survival?
2. How was Edwin affected by the Holocaust?

This chapter recalls Norman and Leibush's lives as wanted fugitives.

1. Do you agree with the life-and-death decisions made by Norman? Explain your rationale,
2. In what ways was deception a key to Norman's survival and helping others survive? When was
deception necessary?

This chapter tells of Amalie's work for a German-controlled company.

1. What impressed you about Amalie's decisions and instincts for survival in this chapter?
2. Explain why "In the Lions' Den" is a good title for this chapter.

This chapter gives Esther's perspective on being a child of a survivor.

1. Esther says it was not an accident that Norman and Amalie survived. Explain her reasoning. Do you agree?
2. Discuss the pressures that children of Holocaust survivors are under.

Chapter 27: "Get the Plans and Kill the Girl"

This chapter recalls the first meeting of Norman and Amalie.

This chapter looks hack at Norman and Amalie's past and what might have been.

1. Discuss the losses and missed opportunities that Norman, Amalie, and other survivors have endured. Do you think that time heals these wounds? Explain.
2. How have Norman and Amalie dealt with their regrets and guilt? How has their experience changed their views about God?

This chapter recalls Amalie and Esther's 1974 trip back to Poland.

This chapter gives Esther's perspective of the past and present.

1. Discuss what Esther says has been her greatest challenge in life—to accept her parents and their past. Why has it been such a struggle for her?
2. How do you think Esther's relationship with her parents has changed over the years? What has triggered the changes?

This chapter offers some final reflections by Norman and Amalie.